For years, Ta Thi Thanh Thuy toiled on a sliver of land sandwiched between the Mekong River and the South China Sea, a region widely known as Vietnam’s rice bowl, to grow the prized grain.

But Thuy, along with many of her neighbours, has over the past decade completed a production swap – to shrimp – a previously unlikely shift that was spurred by the effects of climate change.

The government has set an ambitious target to more than double shrimp exports from current levels to $10 billion by 2025 and Delta farmers have benefited from local authority training sessions and other measures, including some soft loans.

“Life was very hard for us until we began to farm shrimp,” Thuy, 52, said. “Many shrimp farmers around here have been able to build nice houses and open saving accounts at banks.”

The seawater increase in the delta region has been compounded by the construction of several hyodropower dams upstream, further reducing fresh water flow.

“We planted rice but we harvested no rice,” said fellow shrimp farmer Ta Thanh Long. “There was a time the rice could still grow when the water was still fresh. But then the water became more and more salty each year.”

At least one third of the rice farming area along Soc Trang province’s 72-kilometre coastline has been affected by salination over the past few years, said Duong Minh Hoang, former director of the province’s Agriculture Promotion Centre.

“We have urged local people to switch to crops that are suitable with salination,” Hoang said. “Climate change is impacting everyone here. We have to try to adapt to survive.”

Vietnam is the world’s third largest exporter of rice, but revenue generated from shrimp exports has exceeded earnings from rice since 2013 and is growing quickly.

“Seafood processors around here come to buy up all the shrimp we farm,” said Ta Thanh Tung, 44, one of Thuy’s five siblings who have all switched from rice to shrimp farming.

“We heard they’re exporting the shrimp to Europe, China and the United States”. 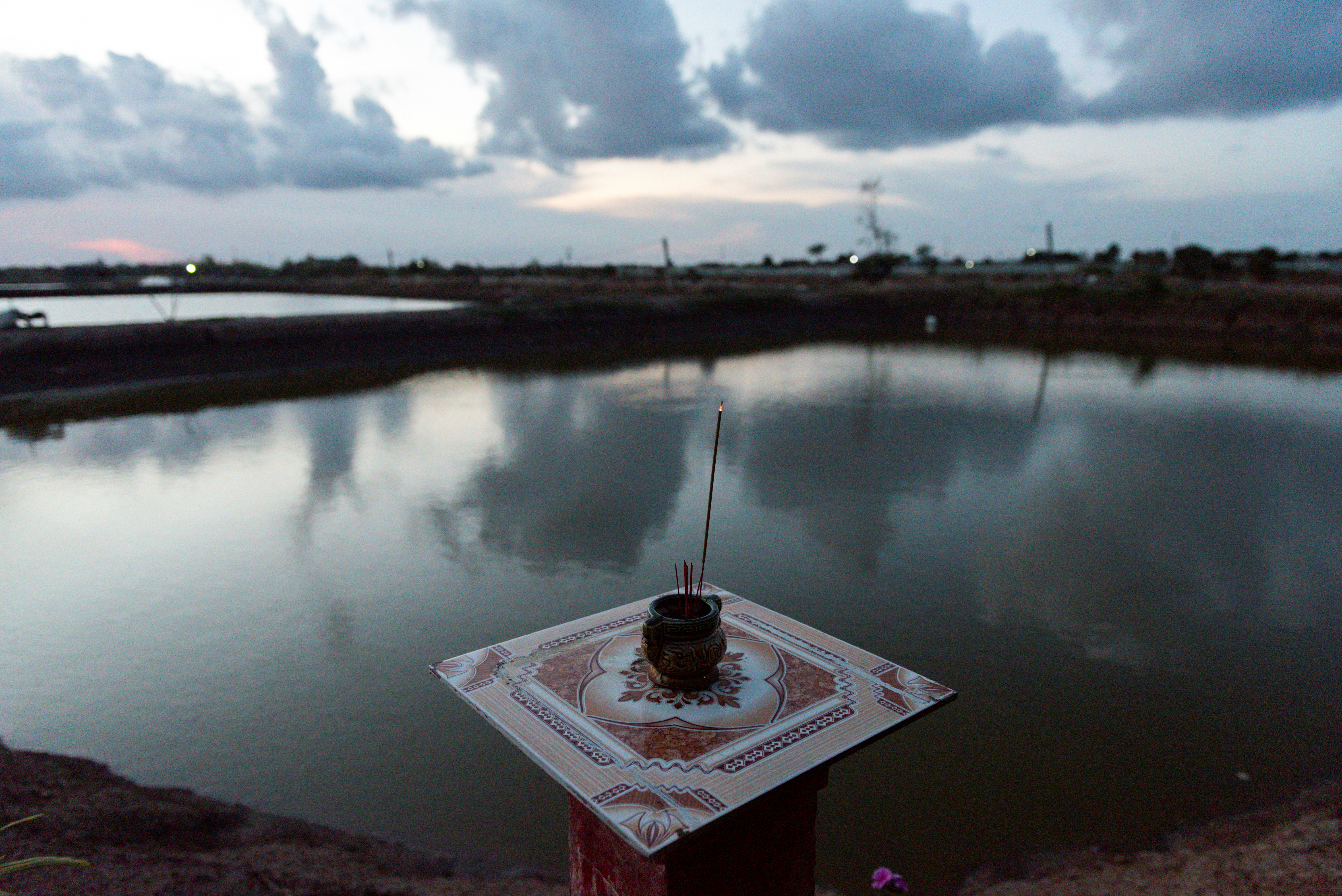 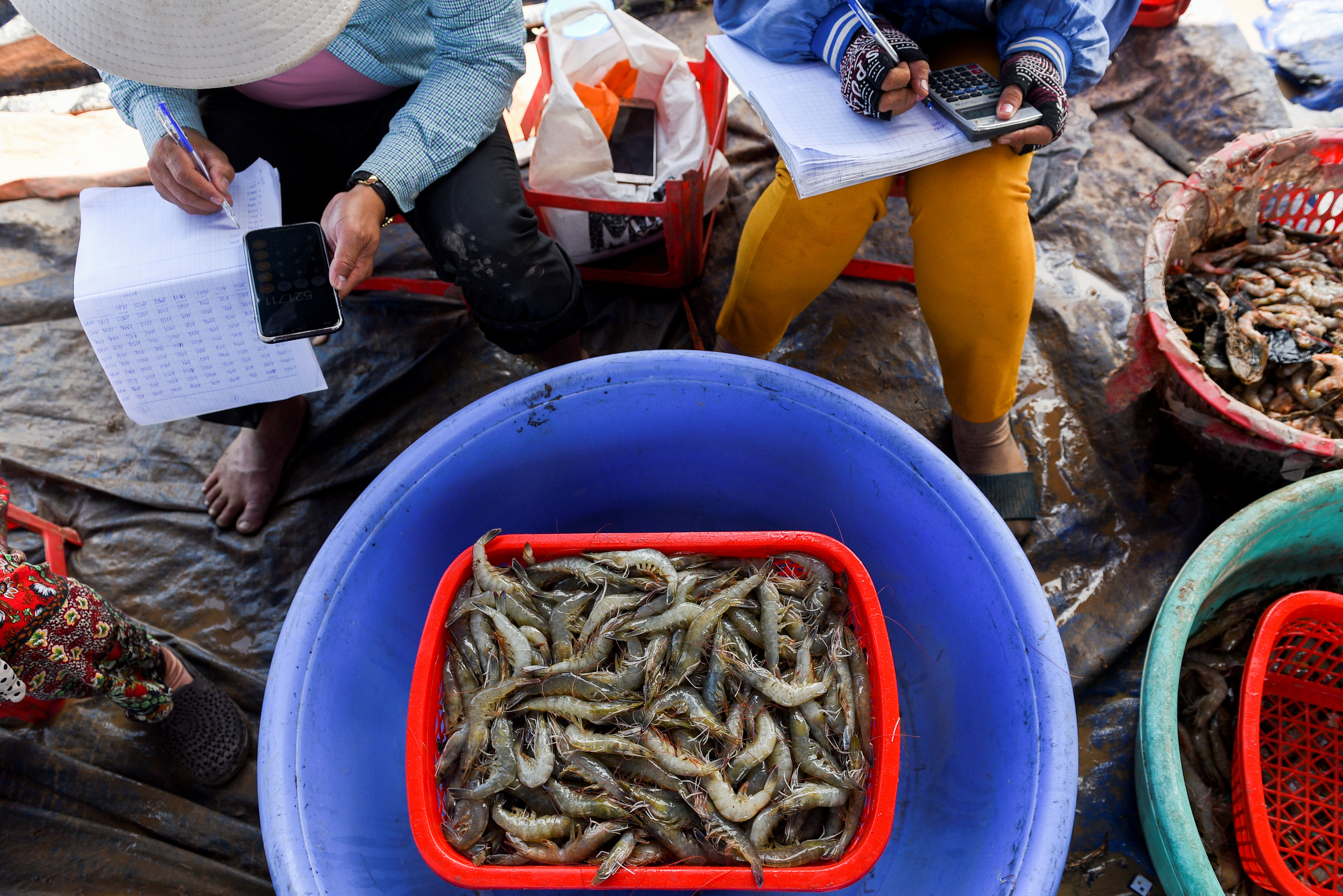 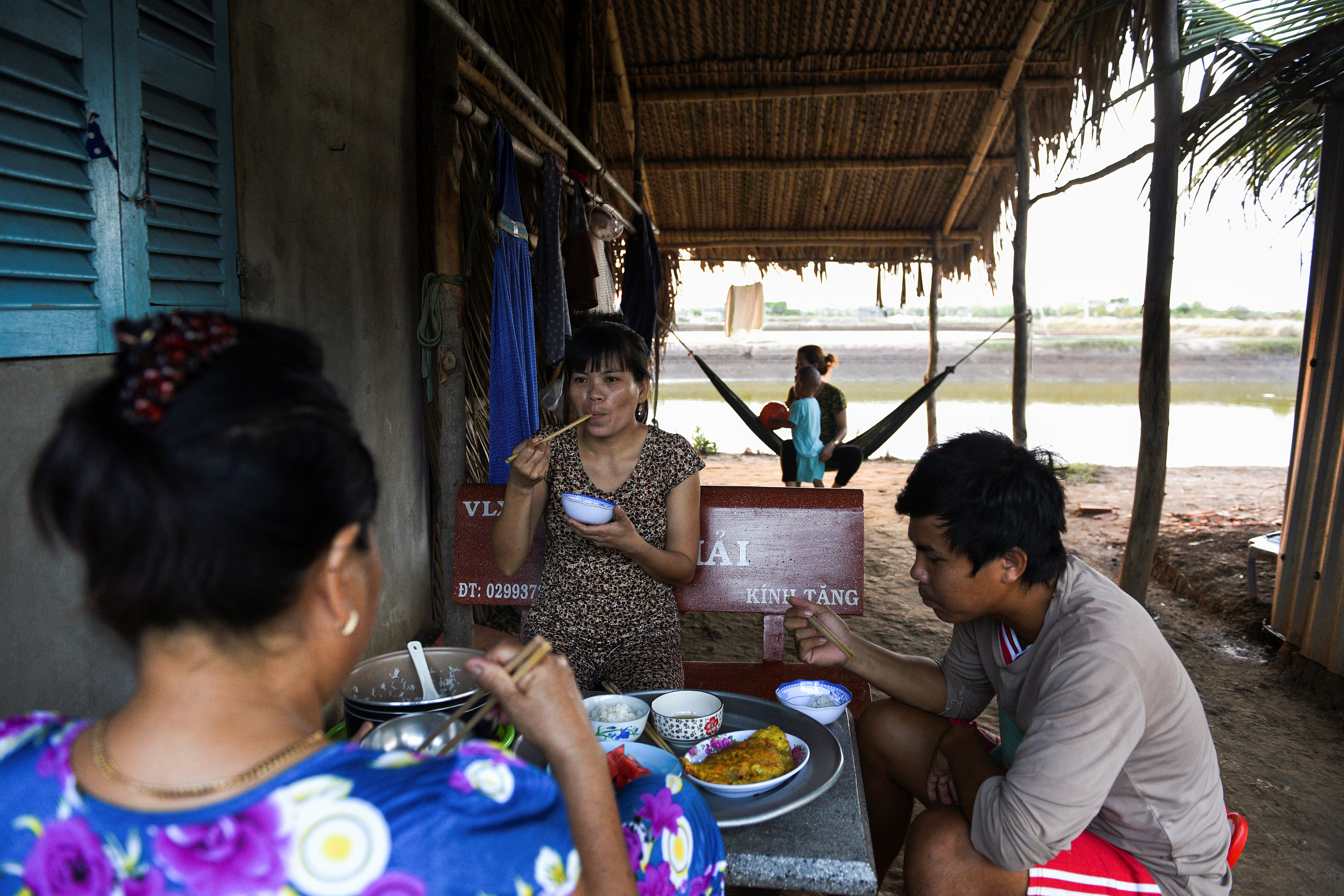 Industry analysts expect exports to rise by 5-10% annually over the next decade as the country’s total shrimp farming lands – mostly in the Delta – increase by 3-5% each year.

Vietnam’s largest seafood exporter, Minh Phu Seafood Corp (MPC.HNO), has an even more ambitious target to turn the country into the world’s largest shrimp exporter. Minh Phu expects more than a dozen recently agreed bilateral and multilateral trade agreements to help boost exports to $20 billion, or a quarter of global exports, by 2045.

That could help ease some of the economic pressure the Southeast Asian country faces in the years ahead. The World Bank estimates that climate change alone is poised to reduce Vietnam’s national income by as much as 3.5% by 2050.

The switch to shrimp from rice, however, comes with its own host of environmental problems.

Switzerland-based NGO, the International Union for Conservation of Nature (IUCN), estimates more than half of the country’s natural mangrove forests, which protect against coastal erosion and storm surges, have been cleared to make way for shrimp ponds.

Aquaculture experts have highlighted a lack of regulatory oversight of the explosion in small shrimp farms, with questions about everything from the raw material used in feed to the way they manage their effluent or waste.

There are particular concerns about the use of antibiotics to treat disease in shrimp stocks. Antibiotics can seep into effluent, which is usually dumped, untreated or inadequately treated, back into the surrounding waterways, raising the risk of chemical pollution in the immediate environment and detrimental knock-on effects down the food chain.

“Whilst overfishing and dams are discussed … the insidious nature of invisible pollutants is not being considered,” said Matt Landos, an Australia-based veterinarian scientist specializing in aquatic animal health. “Yet it’s clear they are present, and levels are negative for fishery productivity.”

Further, the increasing salination and rising seawater levels that prompted the switch in the first place could end up devastating the Delta.

A rise of 0.7 to 1.0 meters would put about 40% of the region underwater, according to Le Anh Tuan, a professor at the College of Environment and Natural Resources at Can Tho University.

“The shrinking trend will continue over the coming years and parts of the rice fields will have to be converted into aquaculture farms, fruit farms and other crops,” Tuan added.

“We have to dig the wells deeper for freshwater now,” added Thuy. “We are very concerned that because of rising seawater levels our farms will one day be submerged.” Khanh Vu