Chinese retailer Miniso beats Uniqlo and Muji at their game

‘Japan-inspired’ chain lists in US despite challenge of slowing growth

GUANGZHOU — Miniso, a Chinese operator of discount variety shops, has mushroomed by cribbing a product lineup and business model popular with retailers in Japan. A Miniso shop in Guangzhou: Around 60% of the retailer’s customers in China are under the age of 30.

With more than 4,200 outlets in over 80 countries and territories, Miniso, which went public on the New York Stock Exchange last week, aims to use the stock listing as a springboard for growth. Despite criticism that the chain is a copycat of Japanese clothing and sundries retailers like Uniqlo and Muji, it has grown faster than either.

“Our biggest competitive edge is [our products’] exceptionally high cost performance, and frequent launches of new items,” said Ye Guo Fu, Miniso’s founder and CEO at a ceremony at the company’s headquarters in Guangzhou on Oct. 15. The event marked the listing of its shares, which have held above their initial offering price, putting Miniso’s market capitalization at around $7 billion as of Oct. 19.

The company seems to have won over investors. The IPO raised roughly $600 million, which it plans to spend on new stores and developing systems for the post-pandemic era. 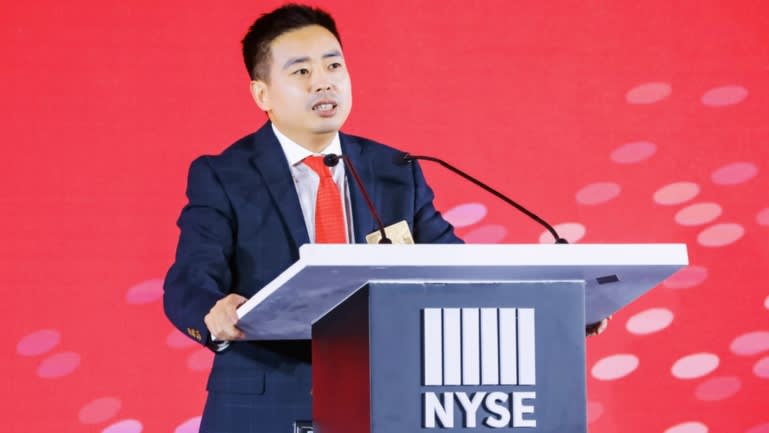 Miniso CEO Ye Guo Fu speaks at a ceremony in Guangzhou on Oct. 15 marking the company’s listing on the New York Stock Exchange.

Miniso is one of China’s largest discount variety chains. It sells many items for 10 yuan ($1.50) and has a payroll of around 3,000 people.

Its growth has been explosive. It opened its first shop in Guangzhou in 2013; by August 2018, it had more than 1,000 overseas outlets. The following month, Chinese internet giant Tencent and others had invested 1 billion yuan in the company. Miniso released products developed in collaboration with Disney in December 2019. This year is highlighted by the New York stock listing. Tencent holds 4.8% of the shares.

The chain sells 8,000 items in 11 categories such as stationery, toys, cosmetics and sweets. Items available for 10 yuan in China include 800-piece boxes of cotton swabs, a 500ml bottle of hand soap and a set of five clothes hangers. Character goods line the shelves, ranging from a stuffed Pikachu doll for 35 yuan to a Mickey Mouse water bottle for 49.90 yuan. Around 95% of the items sold in Chinese shops are said to be priced under 50 yuan.

Miniso’s product development policy calls for introducing 100 new items selected from 10,000 ideas, every seven days. The company began working with global brands around 2019 and it now has 17 such partners, including Disney and Hello Kitty. The constant rollout of new items and character goods pulls in young shoppers. Around 60% of Miniso’s customers in China are under the age of 30.

Ye is a native of China’s central Hubei Province. After starting an accessory shop chain in Guangdong, he founded Miniso in 2013. He is said to be a Japan enthusiast, having visited the country frequently and seeing many Chinese products at Japanese retailers, which gave him the idea of launching a variety shop chain in China.

Miniso’s global partners are keen to benefit from its rapid expansion. As of the end of June, the company had 2,533 outlets in China and 1,689 in overseas markets, including Japan. A mere seven years after its launch, Miniso is one of the world’s largest variety shop operators. Most of its outlets are run by local companies that have signed franchise agreements with Miniso. In Japan, it has shops at Aeon Mall shopping centers. 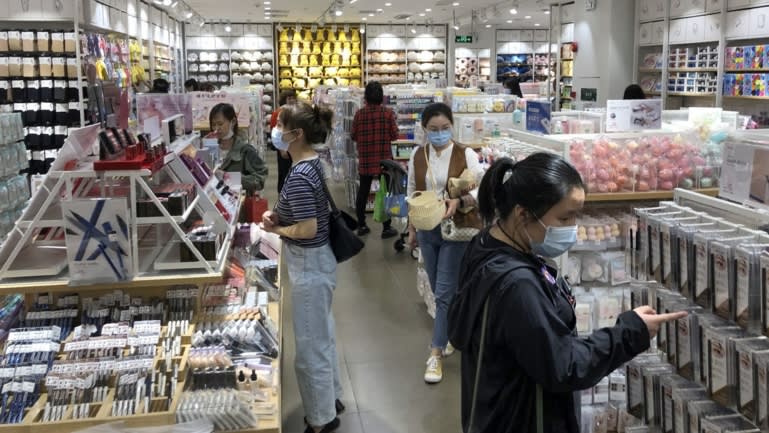 Miniso stores typically stock more than 8,000 items, from cosmetics to toys to food. Its product lineup is constantly changing.

The company appears to be taking a breather. The number of shops has remained flat since the start of the year, due in part to the coronavirus pandemic. But Ye’s goal of running 10,000 stores means Miniso likely to open new outlets more quickly, following the share listing.

The company’s earnings have taken a hit from the pandemic. Sales in the year through June fell 4.5% on the year to 8.9 billion yuan, as shops temporarily closed. But profitability is a bigger problem. Miniso has only disclosed its earnings for the last two financial years, during which it suffered net losses. As the cost of opening new shops rises profits seem to be falling, both in China and abroad. A Chinese securities company says Miniso’s gross profit margin is far lower than that of its rivals.

Miniso has other challenges. It drew criticism in September after a nail polish it sold was found to contain a carcinogen in concentrations 1,400 times higher than the legal limit. Chinese media have reported that the company is involved in more than 10 intellectual property lawsuits.

There are also question marks over the company’s beginnings. Miniso’s Japan website says the company was founded jointly by Ye and a Japanese designer, Junya Miyake. The company says it launched its business in Tokyo and later made inroads into China. This contradicts information on its Chinese website. The listed address of Miniso’s Japan unit is nonexistent. Miniso says it will correct the discrepancies and mistranslations on the various versions of its website.

Many observers say Miniso mimics the logos and business methods of Japanese apparel and variety goods retailers, including Uniqlo, Daiso and Muji. “We respect these brands. But we have 11 product categories, which do not overlap theirs at all,” the company says.

Chinese coffee shop chain Luckin Coffee, which grew even faster than Miniso has, was delisted in the U.S. in June due to accounting fraud. Some analysts believe its runaway growth — it opened more than 4,000 shops in its first two years — led Luckin’s managers to cook the books. Miniso has a number of issues to address, such as improving disclosure, before it can again pick up the pace of its expansion.